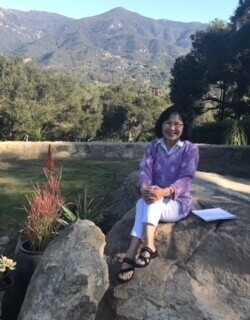 Born in Korea, Jeong grew up in a family of artists. As a young child, it became second nature for her to perceive magic in the mundane. The abundant lotus ponds she passed daily in the country with their leaves became, through her eyes, miniature inverted "umbrellas" floating lazily on rain-like ponds. From each umbrella extended a colorful flowered "handle" capping a graceful green shaft.

Painting provided a fertile outlet for her imagination and Jeong eagerly began her artistic endeavors at an early age. She continued to pursue her passion in high school.

Then, the practicalities of life and the economic concerns of her family intervened. Jeong found herself on an additional course toward the achievement of a BA degree in economics. While successfully completing her academic goals, she managed to stay connected with her beloved art by attending a fashion design institute.

Subsequently, her life was filled with marriage and immigration to the United States in 1975. Jeong currently resides happily in the idyllic and inspirational setting of Santa Barbara, California.

She, once again, has the time and opportunity to engage full-time in her first love. She
continues to wholeheartedly create, capture, and portray the enchantment that she has
always seen in the world around her.

She is a long-time member of the Santa Barbara Arts Association.
Jeong works in oil and paints weekly with her art colleagues.